If you have any questions not listed here, please ask and we will answer!

BreatheSafe is committed to providing a safe and healthy workplace for employees, contractors, subcontractors, visitors, and all other persons whose health or safety could be at risk through our work.

To ensure a safe workplace and follow our duty of care, BreatheSafe has implemented practices throughout the workplace to prevent the spread of COVID-19 and keep everyone healthy and safe.

This includes, but is not limited to, practises such as:

Contact us for any further information on our COVID-19 policies and procedures and we would be happy to help.

Other policies can be found here

Why BreatheSafe? Aren't all filters the same?

BreatheSafe High Pressure HEPA Filtration Systems are different from all other systems on the market.

We use HEPA H14 filters for the TL unit, making them 99.99% effective with respirable and inhalable hazardous dust of all sizes. We test every filter to make it certifiably HEPA H14 and have 3rd party testing to support our claims. Contact us for more details on third-party testing.

Unlike other filters on the market, BreatheSafe systems are equipped with the intelligent INPRESS control unit. This unit measures the outside and inside pressure and automatically adjusts turbine motor speed to maintain a set pressure. This extends the life of the unit as it is not running full speed the entire time. This speed is approximately 30% at the beginning of the filter lifecycle and increases as necessary as the filter gets full.

Unlike our main competitors, we use brushless motors to allow finer control over our systems and increase longevity.

This control over the motor speed greatly enhances filter efficiency! According to NASA 2016 paper on particulate removal by HEPA filters, the lower the velocity of the air being pushed through the filter means higher filter efficiency. 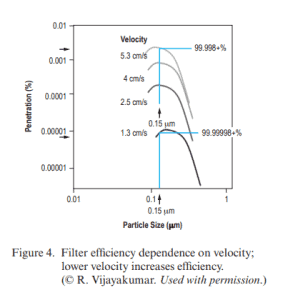 Every unit is custom designed for the specific needs of the environment it is entering into.

What does this acronym mean?

Why use brushless motors? Is it important?

Our core market is production mining where machines are working on average 18-22 hours a day, 7 days a week.  In regard to electric motors, at the time there was nothing that was designed to cope in these conditions. We wanted a motor that would mean only changing the filter when required and not having to replace the electric motor due to failures.  This could mean an immediate gain in reducing maintenance costs.

The industry standard for electric motors – brushed options will not last more than 5000 hours maintenance-free. On average, the life span of these electric motors is between 2,500 – 3,500 hours before the motor fails, commonly due to the brushes wearing out or other internal faults.

For us to provide a motor that would last well over 5000 hours or 12 Months in service maintenance-free, we had to develop our own range to meet these high specifications.

The only way we could achieve these high standards was to develop our own brushless motors. We are now leading the way in the development of BRUSHLESS MOTORS with AUTOMATIC CONTROLS.

Currently, our systems outperform every other brand in the market if you are comparing apples for apples.

What filter works best for me?

Different filters meet different needs, and it’s important to know what you need so you don't spend more than required.

Send our experts a message via the contact form and we’ll get back to you.

What is Auto Cabin Pressurisation?

What are the benefits?

Traditional systems use a brushed blower motor that cannot be controlled so works at 100% capacity all the time. All these systems filter way more air than is actually required which in turn leads to reduced filter life.

So on sites with high ambient conditions, this will make the difference between the air-con working effectively and the machine staying in service or having to be stood down for air conditioning maintenance.

Unlike our main competitors, our system allows finer control over our systems and increases longevity.

By only filtering the air that is required, we reduce the velocity of the air going through the HEPA filter media which reduces the load on the media again increasing the effective service life of the media.

This benefit was originally conceived to increase the efficiency of the activated carbon filtration module installed on machines working in extremely gaseous environments like foundries.

To get the most out of the activated carbon you have to allow the gasses time to be absorbed by the carbon – How do you do this? Reduce the velocity of the contaminated air going through the carbon.

This control over the motor speed greatly enhances filter efficiency too! According to NASA 2016 paper on particulate removal by HEPA filters, the lower the velocity of the air being pushed through the filter means higher filter efficiency.

Will you custom design your system for our ____?

Absolutely! Send us a message to discuss how we can meet your needs.

We have an unsual project...

We will keep working until we find a solution to your problem or for your project! Send us a message to discuss how we can meet your needs.

What is dust related lung disease?

Breathing in fine dust particles over an extended period of time is hazardous to your health. Mineworkers are subject to the disease due to constant exposure levels of:

Type of exposure and disease:

Eventually, the body is not able to remove harmful types of dust from the lungs. Dust stuck in the lungs causes inflammation which leads to tissue scarring diminishing the
lung capacity to bring in oxygen and expel carbon dioxide.

The scarring of the tissue of the lungs can lead to heart disease due to blood restriction. Early signs and symptoms may not manifest for years and may go unnoticed by workers. It is imperative that Workers’ Health is continually examined and it’s the key in early detection.

Workers’ at greater risk may have been exposed to:

Prevention and protection Section 135 of the Mining and Quarrying Safety and Health Regulation (2001) and section 89 of the Coal Mining Safety and Health Regulation (2001) require that workers’ exposure does not exceed the exposure limit applying to specific dust hazards. The management of risk must be established by a competent person, such as an occupational hygienist. The risk process may include specific risk assessment techniques.

• It is recommended that mine operators audit and review the effectiveness and implementation of the site safety and health management system to minimise the risk of
lung disease to workers.

• It is also recommended site senior executives review that a mine’s current management plan for dust includes regular monitoring and assessment of the working environment, work procedures, and equipment and installations at the mine to minimise worker exposure to unhealthy dust levels.

Sulfuric acid is the most common industrial chemical used worldwide.

It is used in the production of phosphate fertilizers.

And extensively in the manufacture of explosives, other acids, dyes, glue, wood preservatives, and automobile batteries.

Other uses are in the purification of petroleum, the pickling of metal, copper smelting, electroplating, metalwork, and the production of rayon and film.

It is a serious disease caused by breathing in fine particles of coal dust, carbon, or graphite over an extended period of time. Prolonged exposure to high concentrations of Coal Dust to workers’ lungs leads to dust collecting in the air sacs,  scarring of the lung tissue, and lung elasticity is affected.

If untreated or undetected, enough scarring tissue builds up. Acutely compromising a workers’ lung function. Coal Workers’ Pneumoconiosis has an extended latency period. Commonly 10 years between first exposure and identification of the disease.

What are the Symptoms?

How is it diagnosed?

Coal workers’ pneumoconiosis is detected by chest X-ray and by testing lung function. The use of a CT scan and lung biopsies are used to confirm a diagnosis.

What is the treatment?

The scarring of the lung tissue cannot be reversed. Workers diagnosed with the disease need to avoid further exposure to high concentrations of coal dust.

What should I do if diagnosed?

The worker must work away from further contact with coal dust and have a doctor continually monitor the worker's health.

How Do I prevent it?

Avoid exposure to high levels of coal dust. Control the level of exposure and must use personal protective equipment or engineering controls to prevent breathing in harmful dust.

Upon contact with moisture, including tissue, hydrogen fluoride immediately converts to hydrofluoric acid, which is highly corrosive and toxic and requires immediate medical attention upon exposure. Breathing in hydrogen fluoride at high levels or in combination with skin contact can cause death from an irregular heartbeat or from fluid buildup in the lungs.

Do you meet industry standards?

We have been meeting the new ISO 23875 performance for a while now, with the requirements being:

The BreatheSafe High Pressure Air Filtration System is an automatically controlled system that measures pressure and adjusts turbine motor speed to meet set pressure. Be reassured with our automatic data logger and keep track of pressurisation and alerts throughout the day. Our HEPA Recirculation Air Filter minimises CO2 levels in the cabin by refiltering air within the cabin and blending with clean fresh air from the outside cabin. *Must be purchased with a CO2 monitor

Asbestosis: Are there health effects?

Current scientific and medical evidence supports the fact that simply living or working in a building containing asbestos is not dangerous as long as the asbestos is in good condition (i.e. undamaged).

It is when asbestos is worked with or disturbed and asbestos fibres are released that the risk of developing an asbestos-related disease is increased.

The people at greatest risk of developing an asbestos-related disease are those that frequently undertake repairs, renovations and other work which can generate the release of asbestos fibres into the air.

However, asbestos is only a risk to health when asbestos fibres become airborne and are inhaled into the lungs. Most fibres are removed from your lungs by your body’s natural defences (e.g. coughing); however, some fibres can remain in the lungs.

The risk to health increases with the number of fibres inhaled and with the frequency of exposure. Asbestos-related diseases usually take many years to develop. The risk of developing an asbestos-related disease increases in proportion to the number of asbestos fibres breathed in over a lifetime. Occasional exposures to low concentrations of asbestos fibres, for example from house fires or renovation work on a neighbouring property, are likely to be associated with low risk to health.

The idea that ‘one fibre will kill’ is not supported by scientific evidence as everyone has had some exposure to asbestos fibres. The burden of asbestos fibres in the lungs, resulting from typical background exposure, appears to be tolerated by most people. Post-mortem studies of people aged between 60 -79 years who had not died from asbestos-related diseases have shown up to one million asbestos fibres per gram of dry lung tissue.

Except in cases of high occupational exposure, the incidence of asbestos-related disease is usually low.

Chronic lung disease can lead to respiratory impairment and to diseases such as lung cancer. Asbestosis causes widespread interstitial fibrosis (scar tissue between the alveoli, spread over the lung).

It is difficult to distinguish from other causes of interstitial fibrosis and only confirmation of exposure to asbestos or detection of unusually high numbers of asbestos fibres in the lung is considered conclusive evidence of this disease.

Cannot be distinguished from those cancers that are caused by other agents such as tobacco smoke.